Review: We Cast a Shadow by Maurice Carlos Ruffin 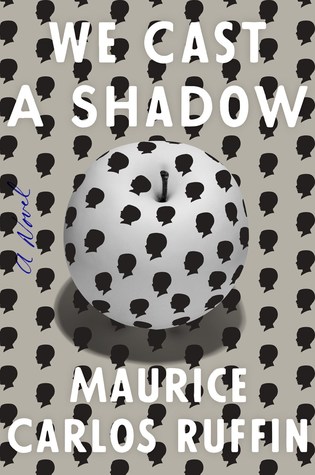 A bold, provocative debut for fans of Get Out and Paul Beatty’s The Sellout , about a father who will do anything to protect his son–even if it means turning him white.

How far would you go to protect your child?

Our narrator faces an impossible decision. Like any father, he just wants the best for his son Nigel, a biracial boy whose black birthmark is growing larger by the day. In this near-future society plagued by resurgent racism, segregation, and expanding private prisons, our narrator knows Nigel might not survive. Having watched the world take away his own father, he is determined to stop history from repeating itself.

There is one potential solution: a new experimental medical procedure that promises to save lives by turning people white. But in order to afford Nigel’s whiteness operation, our narrator must make partner as one of the few Black associates at his law firm, jumping through a series of increasingly surreal hoops–from diversity committees to plantation tours to equality activist groups–in an urgent quest to protect his son.

This electrifying, suspenseful novel is at once a razor-sharp satire of surviving racism in America and a profoundly moving family story. Writing in the tradition of Ralph Ellison and Franz Kafka, Maurice Carlos Ruffin fearlessly shines a light on the violence we inherit, and on the desperate things we do for the ones we love.

Review:
Maurice Carlos Ruffin’s debut novel, We Cast a Shadow is several stories in one. The first is a story about a father wanting to do what is best for his son (in his eyes) because his son has is mixed race and has a large birthmark on his face. There are many moments where I think that a father’s love is one of the most powerful motivator of the father, and he will do anything, even embarrass himself, to give him what he thinks his son needs for a better place in society. A great father and son stories really pulls at me because I am a father with two sons and even though we do not face the same challenges as this father and son, there are sacrifices I will make to make sure they have a better life. A great deal of the novel is spent looking at the motivation of the father and wondering if you would do the same thing in his place if you felt so strongly that your actions will give your child a better life. I know that his motivation, buying his son a procedure to turn whiten his skin, is not really the most ethical of reasons, but we all have our motivations.
The second is the place of skin tone in the world in which the narrator lives. This novel takes place in the near future, and America has become even less accepting of people of color. There is a way that the narrator is seen as a pariah, that due to the color of his skin, he does not belong as a lawyer or as an educated person at all. The beginning of this reminds me of Ellison’s Invisible Man, and even the opening sentences opposite each other. I see the influence of many great novels and parts of culture, but I would say that the reflection of Nabokov’s Lolita much stronger than many of the others. Here is an older man with so much love (though fatherly and not relationship love) that he will do ANYTHING to make sure that he does what he feels is right, even if it is unethical and hurtful. There are even scenes that are similar between the two novels (the marital climax of Lolita and the scenes afterward is exactly the same as the marital climax of this novel). There are many things about this novel that can be discovered after extra readings, the names of places and things all having meaning, and Ruffin spent a great deal of time on putting it all together. It is a joy to catch some of these easter eggs and codes.
There are so many tendrils of story here, so much of the satire and the jokes, that I miss, and it is simply because I am not this novel’s target audience. This novel is not written for white people, and though I can enjoy it, I also have to understand that it is  not for me. I have read a few of the poor reviews of this novel, and most of them are from people who do not understand or that the action and narrative makes them feel uncomfortable so they blame the book and the author for their own feelings. These people are the same people that are mad because of Get Out or Sorry to Bother You because it does not include them. There are people who dislike it simply because they do not feel included. The other problem is people who think that they understand and will go out of their way to explain to Ruffin what he is trying to say. It is the same kind of mentality of the people who like to touch the hair of black strangers. They do not mean anything by it because they think they understand the situation, but if a person of color tries to explain how the hair toucher is wrong, the hair toucher now will contradict and try to tell person of color about their own culture. I am in neither of these camps. I do not claim to know everything about the culture meanings in We Cast A Shadow, but I am not offended by this. If I did claim to understand it, I would probably be wrong anyway. The truth is that I know that this novel is important, that there is merit to the moral of the story. And even though I might night understand everything, I am not distracted from enjoying a fast paced novel with great, strong writing.
I received this ARC through NetGalley in exchange for an honest review.

This entry was posted in Reviews, Uncategorized. Bookmark the permalink.

1 Response to Review: We Cast a Shadow by Maurice Carlos Ruffin