Posted on January 27, 2019 by ghostvillehero 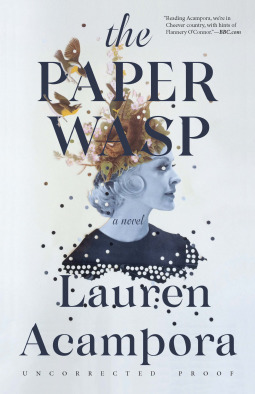 Publication Date: June 11, 2019 by Grove Press. Nothing is better in this world than a preorder:

An electrifying debut novel from the acclaimed author of The Wonder Garden, The Paper Wasp is a riveting knife-edge story of two women’s dark friendship of twisted ambition set against the backdrop of contemporary Hollywood In small-town Michigan, Abby Graven leads a solitary life. Once a bright student on the cusp of a promising art career, she now languishes in her childhood home, trudging to and from her job as a supermarket cashier. Each day she is taunted from the magazine racks by the success of her former best friend Elise, a rising Hollywood starlet whose life in pictures Abby obsessively scrapbooks. At night Abby escapes through the films of her favorite director, Auguste Perren, a cult figure known for his creative institute the Rhizome. Inspired by Perren, Abby draws fantastical storyboards based on her often premonitory dreams, a visionary gift she keeps hidden.

When Abby encounters Elise again at their high school reunion, she is surprised and warmed that Elise still considers her not only a friend but a brilliant storyteller and true artist. Elise’s unexpected faith in Abby reignites in her a dormant hunger, and when Elise offhandedly tells Abby to look her up if she’s ever in LA, Abby soon arrives on her doorstep. There, Abby discovers that although Elise is flourishing professionally, behind her glossy magazine veneer she is lonely and disillusioned. Ever the supportive friend, Abby becomes enmeshed in Elise’s world, even as she guards her own dark secret and burning desire for greatness. As she edges closer to Elise, the Rhizome, and her own artistic ambitions, the dynamic shifts between the two friends–until Abby can see only one way to grasp the future that awaits her.

The Paper Wasp is a thrilling, unexpected journey into the psyche and imagination of a woman determined to fulfill her destiny from one of our most unique and incisive writers.

Abby sees her childhood best friend, Elise, at their ten year high school reunion. They spent their friendship with Abby drawing and making up stories and Elise acting them out. Now Elise is in Hollywood, just one big role away from breaking through and Abby is not doing much–living at home, working at Meijer, and pouring over the films of their favorite director, Auguste Perren. Her parents worry about her, and her mother is excited that she is going to her high school reunion. From the very first page, we understand that there is something not quite right about Abby and her relationship with Elise and her relationship with the works of Perren. From that moment at the high school reunion, when Elise tells Abby in a drunken, “Give me a call when you’re in town,” invitation that we all give those old friends and acquaintances we bump into again when we have been drinking, Elise had no clue that Abby was going to take her up on the offer, nor does she know that Abby wants to do things to destroy her.

This is the character of Abby, and what I find interesting and off-putting about her. She does not know nor care what she does to the people around her. Anyone that genuine reaches out to her to try to help her or love her means nothing to Abby. The true problem is that Abby does not see it. In her mind, everything she does, from theft to hurting people who try to help her to just being conniving and ugly toward the people who try to help her, is justified in her mind. There is no guilt, no remorse, and no concern about the destruction that she causes. This makes the entire novel, after it had been finished, more memorable because you rarely find a character that makes mistakes and does not learn from them.

If I had my way, I would have had another 100 pages of the story. I would have had more about their childhood together and more little things that put even more darkness in the relationship between Abby and Elise. As it is, the novel moves fast, reckless, and draws the reader into this world that feels like watching a disaster unfold.

Abby’s hometown is in Michigan. Living in Indiana, I have been there many times. Acampora talks about Abby being close to Lake Michigan, and in on part, she tells about how her sister has moved a few hours north on Highway 31. This struck me as interesting because 31 also goes all of the way through Indiana, and in fact, cuts straight through my city (now we have a bypass from South Bend to Indianapolis but it used to be the only way from Michigan to Indy was hitting every single stop light in my town). I spent a little bit of time looking at maps of Michigan after I read this part, hypothesizing what town Abby is from. There are a few suspects, and it is narrowed down because Abby works at Meijer. Meijer is a regional grocery/department store, like a Walmart but much nicer, especially their produce, that was started in Michigan. They are in the Midwest with stores, in Michigan, Indiana, Ohio, Kentucky, Illinois, and Wisconsin. For Abby to work at one, unless she drove to a nearby city (which is not indicated), the major suspects are, according to the map of Meijer stores in Michigan on the Lake Michigan side and along Highway 31, we have Holland, South Haven, Grand Haven, Benton Harbor, and a couple in Muskegon. I am able to narrow down the setting of the story enough to places where I have been, places I have vacationed or shopped, and I this is one of the things that connected me to this story. I know where Abby came from. I actually could have met a girl like her before, and the familiarity to the location, the stores, and the mentality really connected me to the story more than it might connect others.

This entry was posted in Reviews. Bookmark the permalink.

1 Response to Review: “The Paper Wasp” by Lauren Acampora