Review: It Would Be Night In Caracas by Karina Sainz Borgo

Posted on October 14, 2019 by ghostvillehero 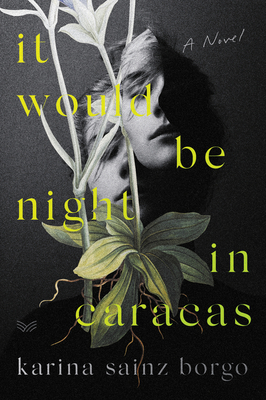 Told with gripping intensity, It Would be Night in Caracas chronicles one woman’s desperate battle to survive amid the dangerous, sometimes deadly, turbulence of modern Venezuela and the lengths she must go to secure her future.

In Caracas, Venezuela, Adelaida Falcon stands over an open grave. Alone, except for harried undertakers, she buries her mother–the only family Adelaida has ever known.

Numb with grief, Adelaida returns to the apartment they shared. Outside the window that she tapes shut every night—to prevent the tear gas raining down on protesters in the streets from seeping in. When looters masquerading as revolutionaries take over her apartment, Adelaida resists and is beaten up. It is the beginning of a fight for survival in a country that has disintegrated into violence and anarchy, where citizens are increasingly pitted against each other. But as fate would have it, Adelaida is given a gruesome choice that could secure her escape.

Filled with riveting twists and turns, and told in a powerful, urgent voice, It Would Be Night in Caracas is a chilling reminder of how quickly the world we know can crumble.

It Would Be Night in Caracas starts with a simple plot: a single woman is burying her mother. She goes back to the apartment that they shared and starts to deal with the process of grief. The problem is that she lives in Caracas, Venezuela, and it is quickly apparent that every day there is one filled with danger. From vigilante groups ran by the government, vigilante groups fighting against the government groups, money that is not worth the paper it is printed on, food shortages, and a thriving black market, the world that Karina Sainz Borgo describes is one that I cannot even wrap my head around. Some people might be put off by the description of how the main character, Adelaida Falcón, gets supplies for her period, or how she hears gunshots all through the night and learns that more of her neighborhood acquaintances have either disappears or been killed throughout the night, but I see this as a reality I do not understand. I see this as a novel of a person who is trying to go about her business in a turbulent climate, hiding out in her apartment, trying to stay quiet while listening to the noise on the outside, until the noise comes to find her. This novel tries to juxtapose the difference between the relative safety of Adelaida feels in the apartment and the chaos outside until the two meet and she has to make decisions that will affect her life but be instrumental to her survival. The tension of the novel picks up in the second half, and I really do feel the nerves that she is feeling. The tightness of the writing makes the urgency feel stronger, and the ending, though it seems as if she does not know how to end the novel for a few pages, does end satisfying.

I enjoyed this novel. It feels tense and dangerous.  I thought the end kind of dragged a little bit, but this is the only complaint I can find. It Would Be Night in Caracas is otherwise one of the best books I’ve read this year.

I received this as an ARC from NetGalley in exchange for an honest review.